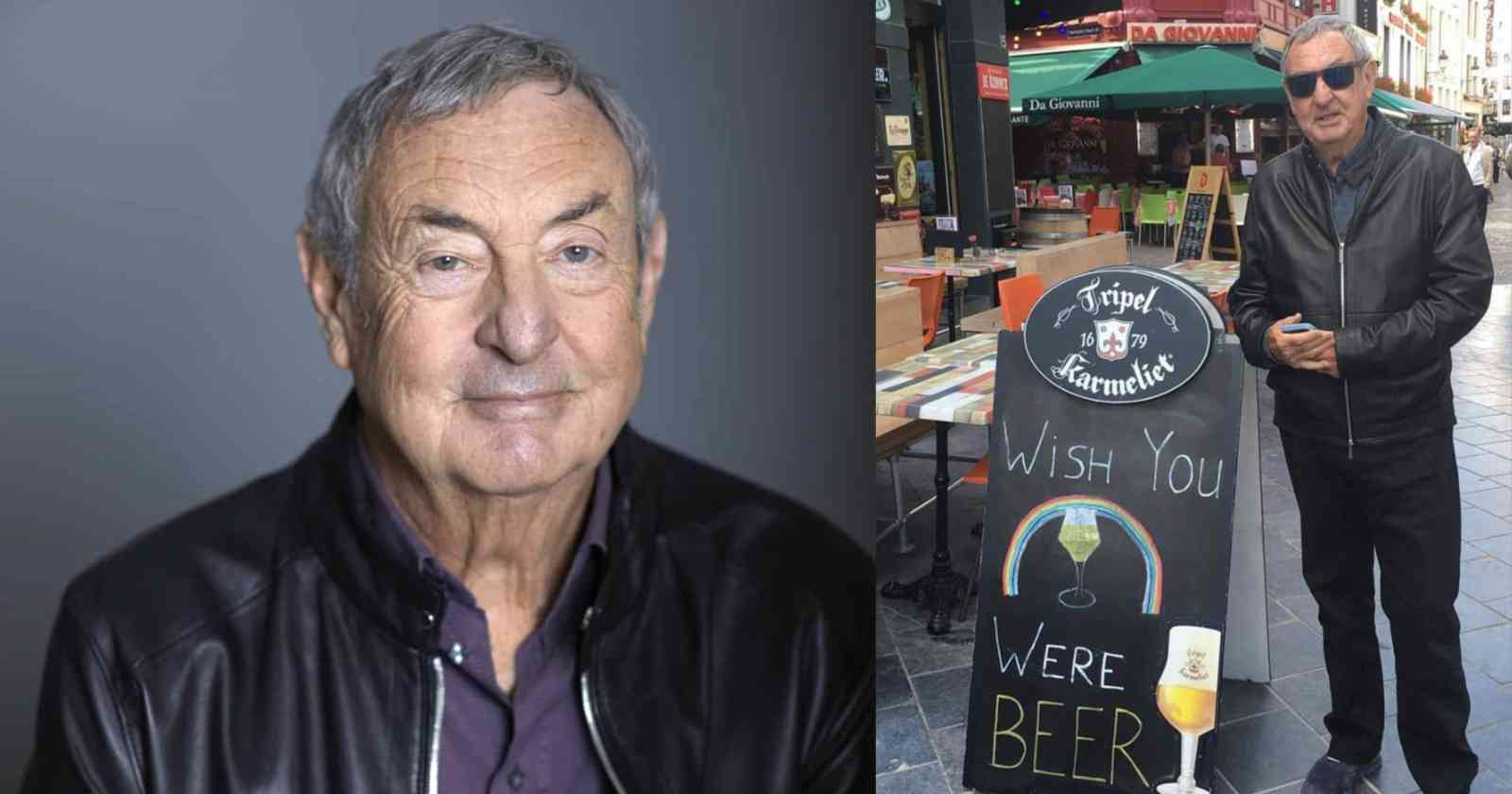 Pink Floyd is one of the biggest Rock and Roll bands of all time that inspired millions of musicians over the decades with classic albums like “Dark Side Of The Moon” (1973) and “The Wall” (1979). One of the important members of the band is the praised drummer Nick Mason that listed in an interview with Ken Bruce at the BBC radio show “Tracks Of My Years” (Transcribed by Rock and Roll Garage) some of his favorite songs and explained why they are so important to him.

The Jimi Hendrix Experience “All Along The Watchtower”

“Well, I chose this because it was really covering two bases. First of all, big fan of Jimi Hendrix. I saw him the first time that he came to the UK. It was an extraordinary evening, he came on as a guest of Cream. That in itself was a pretty extraordinary moment for me. Because that’s when I decided I wanted to be a full-on Rock drummer like Ginger Baker rather than an architect, which was the way I was heading at the time.”

“Plus the fact that the song itself was written by Bob Dylan. I’m a huge fan of Dylan as I think so many people in bands are. He is such an influence with his writing,” Nick Mason said.

In an interview with Steve Barker in 1967, three years before his death, Jimi Hendrix was asked if he had seen Pink Floyd and he said: “I’ve heard they have beautiful lights but they don’t sound like nothing.”

Joe Brown “I’ll See You In My Dreams”

“Again because it covers a number of bases. First of, I was a big fan of Joe Brown. Vicki his wife sang on ‘Dark Side of The Moon’ and his daughter sang with us on tour, I guess 87, Sam Brown. Joe sang this song with the ukelele at the George Harrison memorial. We’ve had every great guitar player, every great sort of British rock star doing something in the show. But that as the show ender was by far the most poignant moment of the evening. It was just terrific,” Nick Mason said.

Born in Lincolnshire, England back in 1941, Joe Brown was a stage and television performer in the late 1950s and has been a recording star since the early 1960s.

Some of his most famous songs are “I’ll See You In My Dreams” (That he performed at the George Harrison tribute show), “That’s The Way It Goes” and “A Picture Of You”.

“Well, I thought we definitely ought to have at least one girl singing rather than just full-on blokes week. I love her songs, I love her writing and the whole thing is sort of encapsulated in this one track. Great lyrics and just a really good song.”

Born in Fort Macleod, Alberta in Canada, Joni Mitchell is one of the most famous songwriters of all time. Her work often talks about social and philosophical subjects with the sound influenced by Jazz, Pop music, Rock and Folk.

Some of her most famous songs are “Big Yellow Taxi”, “A Case of You”, “California”, “Both Sides Now” and “River”. Mitchell also won 9 Grammy Awards, the first one in 1969 for “Best Folk Performance,” Nick Mason said.

“Again, there is a rather nice thing here that ‘Woodstock’ was a song written by Joni Mitchell which relates to an earlier choice. But also when Crosby, Stills and Nash first came to the UK it’s one of the very few shows where I went to see them live and immediately went back the next night to see them again.”

“There is not many bands that have that sort of effect on you. But I just loved it, was the songs, the harmony and the whole thing. I guess is that thing where you almost get slightly annoyed with the idea that we produce so many great artists out of the UK. It’s quite something when there is an American band that has that sort of impact,” Nick Mason said.

“I’ve always liked Toto, like those songs, like what they do but also Jeff Porcaro, who is the drummer. He is the drummer’s drummer and I realized this completely when apart from my own view of it, when my grandson told me what he was learning in his drum class. In fact, it was of course a Toto track. So it’s three generations of fans, really,” Nick Mason said.

“Big fan of Robert, I love his songs, really. I’ve got to know him when he was with Soft Machine when we were both really starting out. We both were regulars at a club called the UFO club in the West End, which were really our launch pad.”

“I worked with Robert on and off a number of times and produced an album for him. We produced a single which actually made it onto the Top of The Pops. It has a wonderful strange violin solo in the middle of it. But it was great fun to do, great fun to work with him,” Nick Mason said.

Born in Kent, England back in 1945, Robert Wyatt is now a retired musician that is the founding member of the influential Canterbury scene bands Soft Machine and Matching Mole.

Initially was a kit drummer and singer before becoming paraplegic following an accidental fall from a window in 1973, which led him to abandon band work, explore other instruments, and begin a forty-year solo career.

“I put this in because it was such a great moment for us, we were recording our first album in Abbey Road. We were in studio 3 recording “The Piper at the Gates of Dawn” and down the corridor The Beatles were recording Sgt. Pepper. There was an invitation to go and visit the gods on Mount Olympus.”

“It was a pivotal moment because actually without The Beatles we probably wouldn’t have existed because Sgt. Pepper was the album that absolutely changed the face of the record industry because up until then it was all about singles. Sgt. Pepper was the first album that actually outsold singles. That enabled bands like us to have more studio time and more freedom to do what we wanted,” Nick Mason said.

One of the best selling bands of all time that influenced generations of musicians all over the world, The Beatles are considered by many the greatest band of all time. All the four members of the group had successful solo careers after the group came to an end in 1970 after the release of their album “Let It Be”.

Bruce Hornsby & The Range “The Way It Is”

“I discovered Bruce Hornsby some years ago and I just found it that sort of perfect blend of great sort of plungin choice of notes, really. Plus great playing on it. I would think that almost every song and album he’s done is something to have on a playlist,” Nick Mason said.

Born in Viriginia, United States back in 1954, Bruce Hornsby is a singer/songwriter and pianist that won in 1987 the Grammy Award for “Best New Artist”.

Some of his most famous songs are “The Way It Is”, “Mandolin Rain”, “The Valley Road” and “Every Little Kiss”.

“‘My Generation’, The Who, again a huge influence I think in me in particular. I mean, once you’ve met Keith Moon you sort of lived and I didn’t know him that well. But we spent some time together. We did some shows where we were supporting The Who. We did some radio show afterwards and Keith on radio was an extraordinary event in itself. It was like having the circus but just in one man.”

The group was inducted into the Rock and Roll Hall of Fame back in 1990 by U2. The Irish singer Bono said about the band at the time: “More than any other group that ever was, The Who were our role models,” Nick Mason said.

Mike + the Mechanics “The Living Years”

“Love the songs and Mike’s become a good friend of mine over the years. (I) Like his music, he is someone great to hang out with even our wives get on together. So what more could you possibly want.,” Nick Mason said.

The English supergroup Mike and The Mechanics was formed in Dover back in 1985 as a side project of Genesis guitarist Mike Rutherford. Initially the band also had singers Paul Carrack and Paul Young, keyboardist Adrian Lee and drummer Peter Van Hooke.

Some of their most famous songs are “Over My Shoulder”, “The Living Years”, “All I Need Is A Miracle” and “Silent Running”.