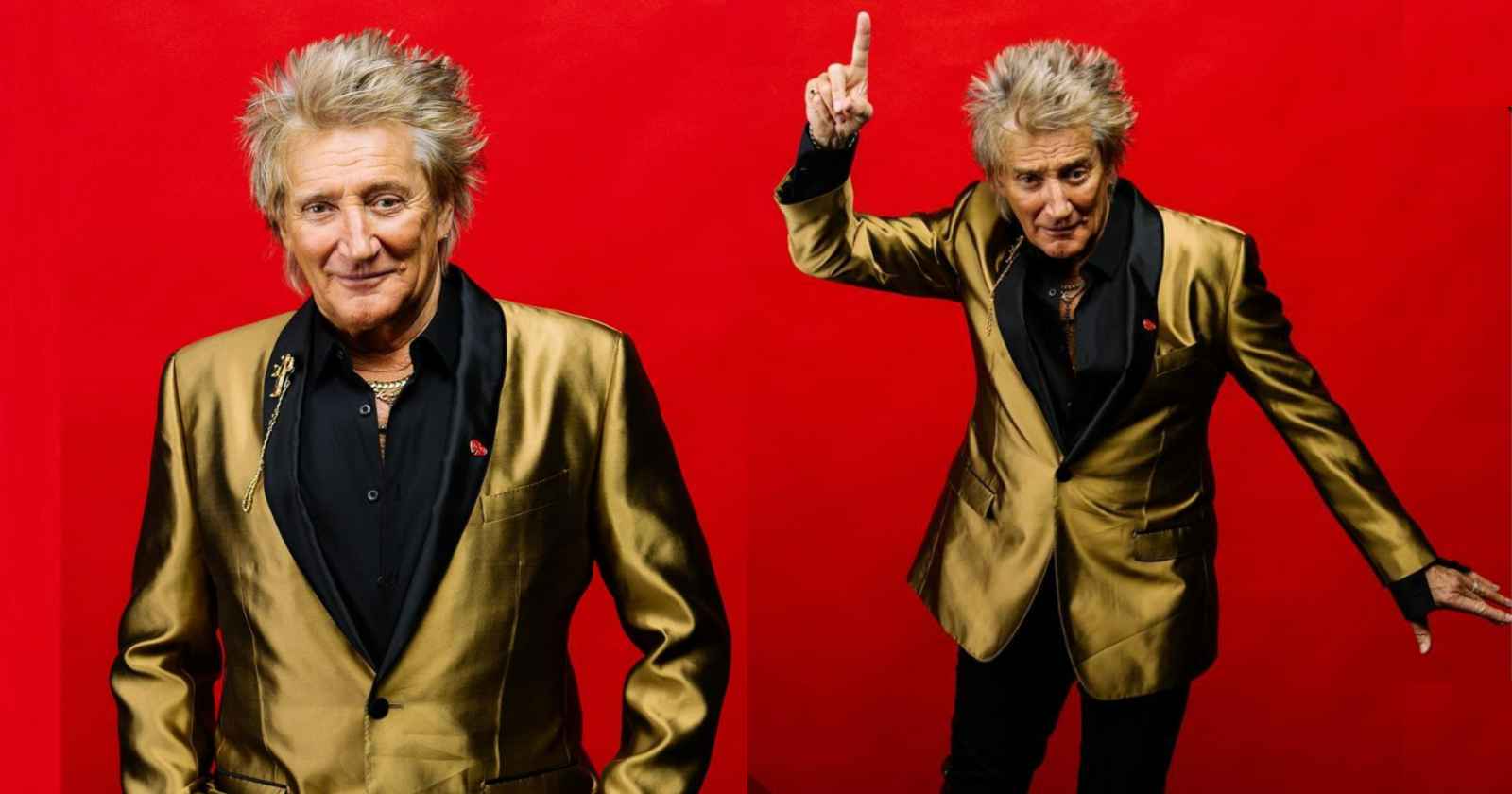 The British singer Rod Stewart is one of the best selling musicians of all time that not only made history with his solo career but with groups like The Faces and The Jeff Beck Group. Over the decades his songs became favorites of millions of people worldwide and in an interview with BBC Radio 2 show “Tracks Of My Years” back in 2018 (Transcribed by Rock and Roll Garage) he listed 10 songs that are some of his favorites of all time and explained why they are so important to him.

10 songs Rod Stewart listed as some of his favorites

“Well, he was a huge infleunce on me in the early days along with lots of others. But he was such a good looking guy and it was a great dresser as well. Horrible the way he died (Car accident) but of course this was the last single that he ever made and became his biggest single. So what more can I tell you, beautiful song.”

The musician continued saying that Cochran was also a great guitarist and was one of his first heroes.

One of the most influential artists of the first wave of American Rock and Roll musicians, Eddie Cochran is often recalled for the hits “Twenty Flight Rock”, “Summertime Blues” and “C’mon Everybody. He tragically died too soon at the age of 21 in 1960 after a road accident in Chippenham, Wiltshire, at the end of his British tour.

“It was one of the first albums that I bought. It was ‘Live at Monterey’, I think, it was a live album. Was also a great influence on The Faces because we used to play this song. I think we recorded it and just lovely, Little Walter on the Harmonica, Francis Clay, Willie Dixon on bass, just haunting!” Rod Stewart said.

The singer continued saying that the Blues is a big part of his background as musician and he loves artists like Muddy Waters, Howlin’ Wolf and Little Walter.

Born in Mississippi back in 1913, Muddy Waters is one of the most influential Blues guitarists of all time and is often called the “Father Of Modern Chicago Blues”. Some of his most famous songs are “Hoochie Coochie Man”. “Mannish Boy” and “Rollin’ Stone”.

“I saw Otis in 1967 at the Kuban state and I cried my eyes out when he sang this song. What was interesting about the show is that he only played for 20 minutes, they have booked Booker T. & the M.G.’s, Rufus Thomas, Carla Thomas, Sam & Dave and they all did 10, 20 minutes and the show was all over in an hour and half,” Rod Stewart said.

Even though Otis Redding had a short career, he became an influential singer and is remembered for songs like “(Sittin’ On) the Dock of the Bay”, “Stand By Me” (cover) and “Try A Little Tenderness”.

“He was with what I grew up with, listening with my mom and dad. (They loved him), my brothers loved him, we all loved Al Johnson. I was made to love Al Johnson. My big brother John took me to see the two movies they made about him and I fell in love with him, I think Michael Jackson too because Michael used to (use) the white gloves and the white socks, which is exactly what Al Johnson used to do. This man sang without a microphone which to me is incredulous. To get up and sing without a mic to 2000 people. So Al, thank you from upstairs” (laughs), Rod Stewart said.

Born in Sredniki, Kovno Governorate, at the time Russian Empire back in 1886, Asa Yoelson adopted the artistic name of Al Jolson and became a famous comedian, singer and actor in the United States, In addition, he was one of the highest paid artists of the country in the 1920s.

“Bobby was a good friend and I remember listening to this album and this track. He was in a group called The Valentino’s, I think and going ‘Oh my god, another great voice’. Sadly he is gone as well. But this just left a big impression with me. I think it was about 1973, 1974, just a big influence. He was a lovely man too, I knew Bobby, he was a lovely man, didn’t look after himself though. I used to be telling him ‘Give up the drugs, you know’. Because I remember me and Ronnie (Wood) went to see him play one of his last concerts in Kentish Town and I think he might be doing the stuff and didn’t warm his voice up. You have to warm your voice up and he was terrible for 3 or 2 numbers. But still a genius,” Rod Stewart said.

With an extensive career that lasted from 1952 until his death in 2014 at the age of 70, some of Bobby Wormack‘s most famous songs are “Across 110th Street”, “If You Think You’re Lonely Now” aand “Woman’s Gotta Have It”.

“All these guys were my influence and I make it publicly known nearly every show I do, I pay homage to black culture. Sam was probably the biggest influence after Eddie (Cochran). I remember I was working at a place in Kentish Town called ‘Shen Kick Wallpapers’, my first ever job and I remember going to work with my mate and we were listening to a little transistor radio. (The station) radio Luxembourg, maybe. Then this heavenly voice came on, Sam Cooke ‘Cupid’. I never saw him sing, that is one regret, I wish I have gone to seen him sing live”.

The musician continued saying that he thinks that Sam Cooke didn’t made any effort to sound like he sounded, Stewart thinks that the American singer had a really natural gift and an incredible voice.

One of the most famous voices in the history of music Sam Cooke is also known for hits like “What A Wonderful World”, “A Change Is Gonna Come” and “Bring It On Home To Me”. He died too soon at the age of 33 back in 1964 victim of a gunshot wound.

“Just gorgeous, Paddy McAloon has got a song on my new album (Song ‘Who Designed the Snowflake’ on the 2018 album ‘Blood Red Roses’), they wrote for me. Although we never met we e-mail each other quite and all the time. This band, I’ll tell you, it’s just wonderful. He takes (his sound) outside the Rock and Roll genre, it’s Jazz almost. Long live Prefab Sprout!”

Formed in Country Durham, England in 1978, Prefab Sprout achieved fame in the 80s as a trio that had brothers Paddy and Martin McAloon, alongside vocalist, guitarist and keyboardist Wendy Smith. Some of their most famous songs are: “Bonny”, “When Love Breaks Down” aand “The King Of Rock N’ Roll”.

Billie Holiday “These Foolish Things (Remind Me Of You)”

“Her quirkiness was the way she phrased. Any young singer out there who wants to learn their trade, listen to what Billie Holiday phrases her words. The voice is an instrument.”

An important American Jazz and Swing Music singer, Billie Holiday invented a new way of manipulating phrasing and tempo. Besides that, she won four posthumous Grammy Awards and some of her most famous tracks are “Solitude”, “Blue Moon” and “I’ll Be Seeing You”.

“When I was little, me brother Bob, who was a bit of a Teddy Boy, he brought this record home. A big 78 and I put it on time and time and time again. Another one that was a big influence on me and then I met him. What a sweetheart of a man, bless him.”

One of the godfathers of Rock and Roll music, Little Richard was the main inspiration of many rock stars that would appear after the 60s. Besides the incredible songs he created, his rebelious way of playing the piano and incredible vocal range was two important aspects to make him one of the most important musicians in history.

“Bruno Mars for me, I don’t wanna say he is a new Michael Jackson. I think he is a man on his own. He is doing something totally brilliant. This song, I believe, is one of the best records ever made into our world. I love it so much. The production, Mark Ronson, it just goes without saying, it’s just different class. The actual brass riff that goes around, it’s been around (for a lot of years), it’s a James Brown thing. But that is what makes it appeal to you and me.”

The youngest artist that was listed by Rod Stewart, Bruno Mars was born in Hawaii in 1985, when the British musician already had a successful career in music. However, Mars is currently one of the most famous artists on the music scene and already had become one of the best-selling musicians in history, with more than 130 million records sold worldwide. But not more than Stewart, who sold an estimated amount of 250 million records all over the world.