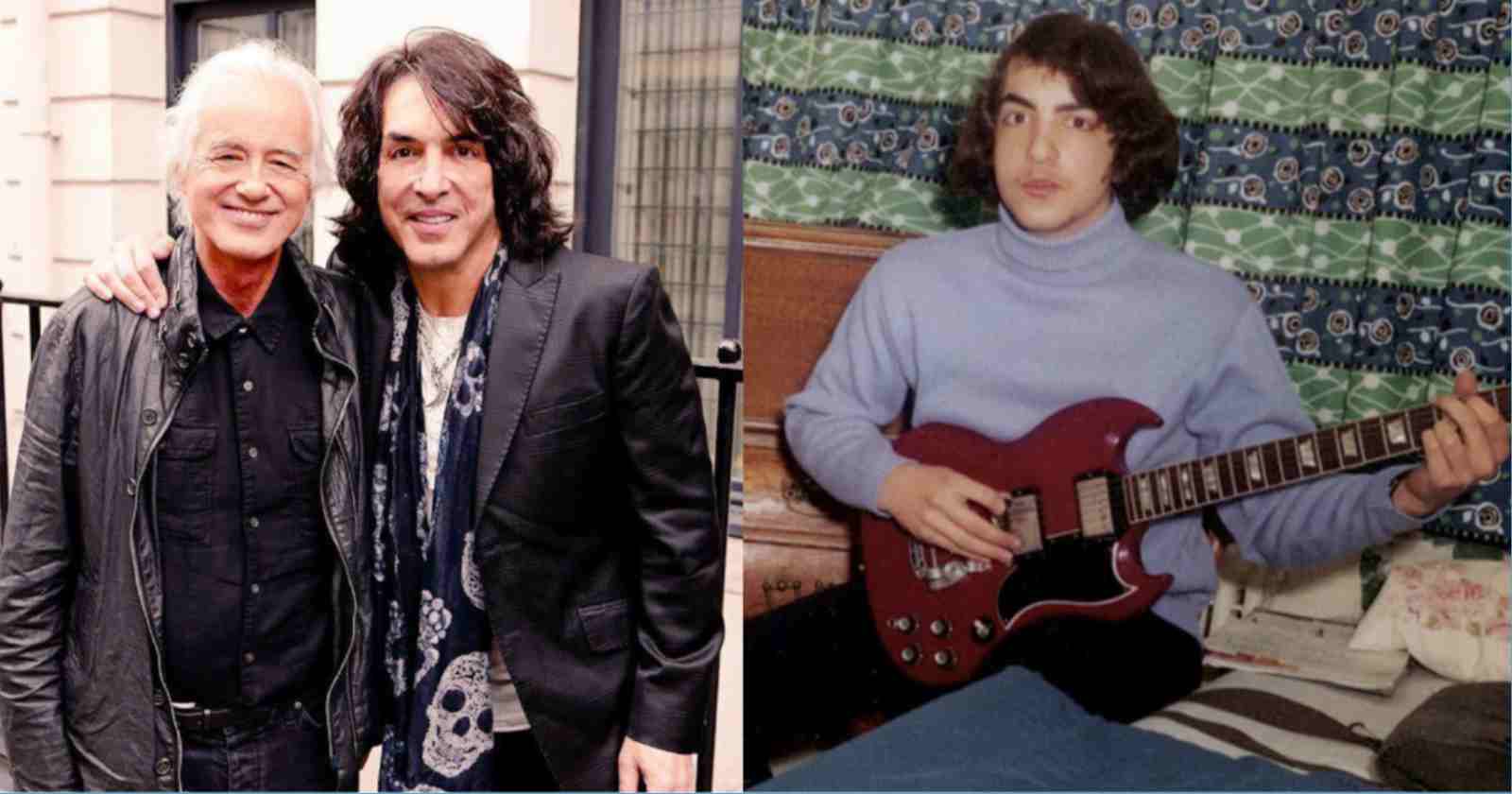 Born and raised in New York City, Kiss co-founder, guitarist and singer Paul Stanley had the chance to watch an impressive amount of famous Rock and Roll bands live in concert, especially in the late 60s. Those groups made a huge impact on him and influenced the musician to pursue a career in music.

Rock and Roll Garage selected 10 famous bands that Paul Stanley saw live in concert before he was star, gathered what he said about those bands and the experience he had watching them.

Millions of music fans would do anything to have the chance to see Jimi Hendrix playing live and Paul Stanley was lucky enough to see the legendary guitarist live twice, when his band had Noel Redding and Mitch Mitchel. On one occasion the opening act was the amazing Sly & The Family Stone. According to the musician the concerts at that time were really cheap and he used to pay only 3 to 5 dollars for tickets.

He watched Hendrix playing at the Fillmore East, a famous Rock and Roll venue in New York near East 6th Street in the (at the time) Lower East Side neighborhood, now called the East Village neighborhood of the borough of Manhattan. It was open from March 8, 1968, to June 27, 1971, and featured some of the biggest acts in rock music at the time.

In an interview with Vice back in 2014, the musician praised the late Hendrix and recalled the experience of watching him live:  “Hendrix was like somebody from another planet. God bless Stevie Ray Vaughan. But there wouldn’t be a SRV without a Hendrix. Hendrix was, it was so deep because it was so original. It crossed so many boundaries. There were no racial implications to what he was doing. He was just Jimi Hendrix. So he was very very dynamic and made a huge impression on me. I saw him twice. I was lucky because in New York I could see people play for 2000 people or less.”

Another famous band that Paul Stanley had the chance to see live right when they were promoting their debut album was Led Zeppelin. The musician said that watching the British Hard Rock live was a turning point in his life and made him want to pursue a career in music. In an interview with 89.3 KPCC radio not long after the 2007 Led Zeppelin reunion (Transcribed by Rock and Roll Garage), Paul Stanley recalled the experience of seeing the British group play live right in the beginning of their career: “I saw them play for under 2000 people. Probably in 1968 or so at the New York State Pavilion, which was at the World’s Fair in New York”.

“It is as close to a religious experience. I would count in one hand, you know. This amazing spiritual marriage of sexuality and music. They were the embodiment at their height of everything. That’s the essence of Rock and Roll. You can call it Heavy Metal or anything you wanna call it. But the basis of it was Robert Johnson, through Elvis played through a bid Marshall amplifier. It was pretty incredible”.

“There was a few moments that I remember as turning points, defining moments. Watching The Beatles on Ed Sullivan was one of them, seeing Led Zeppelin at that show was clarifying for me. It was ‘I will never be that good, but that’s what I want strive for,'” Paul Stanley said.

According to Paul, Led Zeppelin is the reason why most bands exist today

In a conversation with Artisan News back in 2012 during the red carpet for the primeire of “Celebration Day”, the live album and DVD from Led Zeppelin’s 2007 reunion, Paul Stanley once again praised the band, saying (Transcribed by Rock and Roll Garage): “They wrote the book, you know. They are the reason most bands are here today. Their DNA is in everyhting that everybody does.”

“They were so innovative and such visionaries. Anybody that calls that Heavy Metal, that’s sacrilege. They  are truly World Music. They grew up absorbing so much of what they loved. You have a band that is rooted in Appalachian music, Blues, Rockabilly, Classical Music, it’s all there,” Paul Stanley said.

The Who with Buddy Guy opening

One of the most strange bills that Paul Stanley saw was when the legendary Blues guitarist and singer Buddy Guy was the opening act for The Who. The Kiss frontman celebrated Guy’s birthday back in 2019 posting a photo of the two on his Instagram profile and recalled the exact date that he first saw his now friend live in concert: ” I first saw Buddy April 4, 1968 and now at 83 and he is still mind blowing. AWESOME.”

In an interview from the 80s available on Youtube (Transcribed by Rock and Roll Garage), Paul Stanley talked about how much watching The Who guitarist Pete Townshend live influenced, him: “I remember seeing Townshend playing and doing these great windmills, jumping up in the air. Rock and Roll is as physical as it is anything else. So the idea of jumping around or rolling around, whatever you wanna do, set your guitar on fire, those were really avenues to be explored.”

When playing their 1983 hit “Lick It Up” live in concert, in the middle of the song Kiss makes a mash-up of the song with the middle break of The Who’s classic “Won’t Get Fooled Again”. Part that precedes the classic Keith Moon drum solo, that is repeated by Eric Singer, the drummer of the American band.

A few years before watching Jimmy Page live with Led Zeppelin, Stanley saw him playing with The Yarbirds and the opening act was Vanilla Fudge. In an interview with famous Blues guitarist Joe Bonamassa back in 2020 (Transcribed By Rock and Roll Garage), the musician recalled the experience of seeing the famous British band: “I remember going to see The Yardbirds and I was thrilled to go. I think it was probably 1968. I was thrilled because there was going to be Jeff Beck and Jimmy Page together. By the time they hit New York it was just Jimmy. Jimmy was playing Jeff’s riffs. But the interesting thing was it sounded like Jimmy Page”.

During a conversation with Rock & Roll Globe back in 2014, Stanley also talked about watching the band and how it was important for him to learn more about live music: “The Fillmore East was a rock ’n’ roll shrine. On any given weekend, you got to see three great bands for $3, $4 or $5, depending where you sat. I saw The Who, Humble Pie and Derek and the Dominos, plus the Jimi Hendrix Experience twice. That and seeing The Yardbirds with Jimmy Page a few blocks away at the Anderson Theater was really my apprenticeship.”

Most part of the musicians who influenced Kiss were British and one of them was Eric Clapton, that Paul Stanley had the chance to watch live when he was playing with Derek & The Dominos, band that the musician created after the end of Blind Faith. The opening act of Clapton’s band that night was Humble Pie.

Back in 2020, when lamenting on his Twitter the death of the influential guitarist Peter Green, Stanley listed Clapton was one of the greatest Blues guitarists from the United Kingdom, saying: “RIP Peter Green. One of the absolute hierarchy of the original British Blues Greats. Clapton, Page, Beck and Green.”

Formed by the legendary Small Faces guitarist and singer Steve Marriott, Humble Pie also had guitarist Peter Frampton, who would later become a successful solo artist. Paul Stanley was lucky enough to see the band was Derek & The Dominos opening act at the Fillmore East, place that according to the musician was like church for him, because he was there almost every weekend.

In an interview with the San Diego Tribune back in 2012, the Kiss musician recalled that he was at show back in 1971 where the famous Humble Pie live album Rockin’ The Fillmore” was recorded.

“I was there when they recorded it, I was a huge, huge fan. I thought Steve Marriott was the ultimate showman/singer. He turned a venue into an evangelical event. That’s one of those bands I still listen to. With Marriott, there was a tremendous, not only passion in what he was doing, but joy, a sense of exhilaration of almost him being lost in the moment. Not unlike what you see in holy rollers. There was something of a divine intervention, which I was blown away by. And his ability to capture an audience and pull them into his experience.”

Marriott is one of Stanley’s biggest heroes and in a conversation with Sex Pistols guitarist Steve Jones on his radio show Jonesy’s Jukebox back in 2017 (Transcribed by Rock and Roll Garage), the Kiss frontman praised Marriott once again, saying: “Steve Marriott would get up there (on stage) and it was church. He was up there preaching it. I think all the greats share that. There is a commonality to all of them. The greats go up there and they are not selling it. They’re just preaching it”.

Another legendary British band that Paul Stanley was able to watch live during their Progressive Rock days was The Moody Blues. The concert happened in 1970 when they had already released classic albums like “Days Of Future Passed” (1967) and “In The Search Of The Lost Chord” (1968).

Back in 2021 the Kiss musician lamented in his Twitter the death of the drummer of the group Graeme Edge, who died at the age of 80, victim of metastatic cancer and recalled watching the band live when he was young.

“RIP Graeme Edge. I saw the Moodys at the Fillmore East, March 19,1970 and they were EPIC. Sounded just like their recordings. NOBODY could touch them at what they created and to this day you know them as soon as you hear them,” Paul Stanley said.

Talking back in 2020 with famous Blues guitarist Joe Bonamassa  (Transcribed By Rock and Roll Garage), Paul Stanley recalled that on the same day at the same bill at the Fillmore East he saw Traffic, band that had Steve Windwood and was known for songs like “Dear Mr. Fantasy” and the Progressive Rock band Iron Butterfly, know for the hit “In-A-Gadda-Da-Vida”

“At the Fillmore at one given bill you could see Traffic and Iron Butterfly or you could see Buddy Guy and The Who. When you have a great meal, a meal has a diversity. I guess a breath of different flavors. So you have your appetitezer, entree and your dessert”, Paul Stanley said.