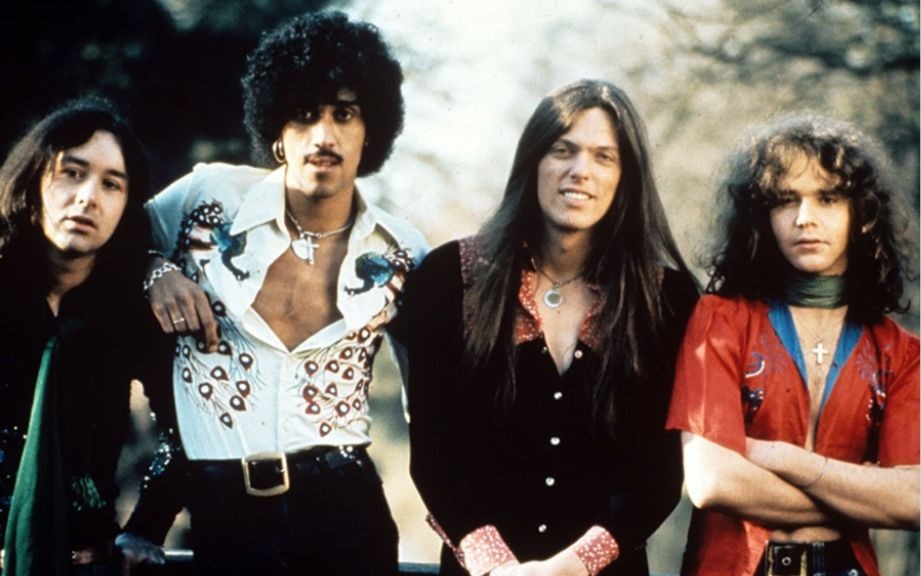 Thin Lizzy is definitely one of the most underrated bands of all time, that never gained the recognition they deserved. The quartet led by vocalist and bassist Phil Lynott had everything to be giant: great songs, amazing instrumentals, inspiring melodies, characterful vocal interpretations and catchy, original sound. But it also had another ingredient: the instability caused by drug abuse, which marked the band’s career in a not-so-positive way.

This 1976 Thin Lizzy hit is probably one of their most well known songs Guitarist Scott Gorham said the song almost wasn’t included on the album “It was 1976 and we were touring America. Jailbreak wasn’t shifting and we weren’t selling any tickets – but there we were, gigging around… The manager came in and told us, ‘Well guys, it looks like you have a hit record’… Our response was, ‘Wow! Which song are you talking about?’ When he replied, ‘The Boys Are Back in Town’, it was a case of ‘Really?’ We’d demoed maybe 15 songs and ‘The Boys Are Back in Town’ wasn’t among the ten that we chose for the album, which in some ways made it a double surprise.

“We owe it all to two DJs in Louisville, Kentucky. They fell in love with the fucking song and played it incessantly until other stations in the surrounding area picked up on it… Had that song not kickstarted the sales of the album, then the band was over.”

Probably the best version of the Irish traditional song “Whiskey in the Jar” was made by Thin Lizzy. The single released in 1972 first gained wide exposure when the Irish folk band The Dubliners performed it internationally as a signature song, and recorded it on three albums in the 1960s.

One of the coolest Thin Lizzy songs, “Cowboy Song” was on the 1976 album Jailbreak and was written by frontman Phil Lynott and drummer Brian Downey.

Written from the perspective of a cowboy, the lyrics tell of his wandering across the United States through various adventures and romances. The song begins with a mellow acoustic, country music-style introduction before a transition to up-tempo hard rock

One of Thin Lizzy’s less remembered good songs, “Don’t Believe a Word” appeared on the 1976 album Johnny the Fox, their seventh studio album The album was written and recorded while bassist/vocalist Phil Lynott was recovering from a bout of hepatitis that put him off the road halfway through the previous Jailbreak tour.

The 1977 tune appeared on the album Bad Reputation and reached No. 14 in the UK Singles Chart in September 1977. The song builds has strong introductory bass riff played by Phil Lynott, adding the vocal melody line sung by Phil Lynott which contrasts and synergizes with the saxophone melodic counterpoint played by Supertramp’s John Helliwell.

The classic “Emerald” is from their 1976 album Jailbreak. About the song, guitarist Scott Gorham said: “It’s got the real sort of Irish-y feel in it. Brian Robertson and I, we came up with the harmony guitars in there. But the main riff came straight out of Phil. It’s a song about ancient times in ancient Ireland, talking about the warring clans and all that.”

With an awesome guitar introduction, the 1975 classic “Rosalie” appears on the album Fighting. The song is a cover from American singer Bob Seger.

“Jailbreak” is definitely one of the band’s biggest hits, that appeared on the album of the same name in 1976. After their previous two albums, Nightlife and Fighting, failed to generate sales, Thin Lizzy were given one last chance by their label, Vertigo Records. The band wrote songs and collected ideas in a studio in Buckinghamshire in late 1975, then convened at Ramport Studios in London in the new year.

This awesome 1979 track starts with an African-style drum beat by Brian Downey, which gives way to twin-guitar harmonies characteristic of Thin Lizzy’s sound.

Another strong Thin Lizzy composition, “Fighting My Way Back” repeated the amazing twin guitars of Scott Gorham and Brian Robertson.

One of the songs that approached more to pop, “Sarah” appeared on their album, Black Rose: A Rock Legend. The tune was written by Phil Lynott and guitarist Gary Moore about Lynott’s newborn daughter.

Chinatown was Thin Lizzy’s tenth studio album, released in 1980. It introduced guitarist Snowy White who would also perform on the next album as well as tour with Thin Lizzy between 1980 and 1982 he replaced Gary Moore as permanent guitarist.